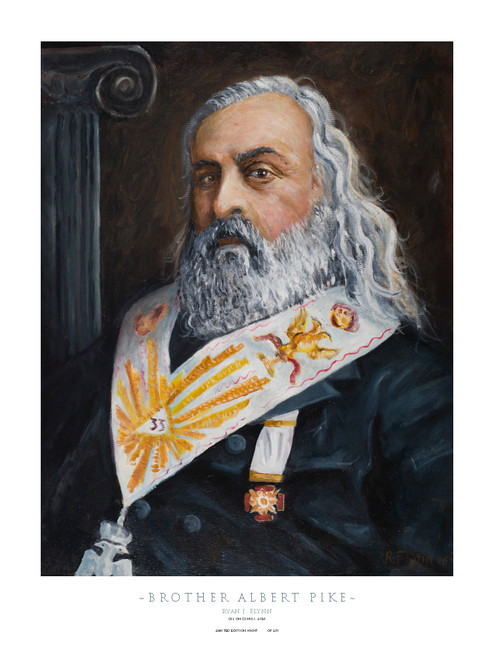 This painting by Masonic Artist Ryan J. Flynn depicting Albert Pike in his Scottish Rite Regalia (c. 1735/8—1807). Albert Pike (December 29, 1809 – April 2, 1891) was an American author, poet, orator, editor, lawyer, jurist, and prominent member of the Freemasons who served as an associate justice of the Arkansas Supreme Court from 1864 until the surrender of the Trans-Mississippi Department in May 1865.

He published Morals and Dogma of the Ancient and Accepted Scottish Rite of Freemasonry in 1871, the first of several editions. This helped the Order grow during the nineteenth century. He also researched and wrote the seminal treatise Indo-Aryan Deities and Worship as Contained in the Rig-Veda. In the United States, Pike is still considered an eminent and influential Freemason, primarily in the Scottish Rite Southern Jurisdiction.

The Four Virtues Past Master Patent

In Thy Name We Have Assembled