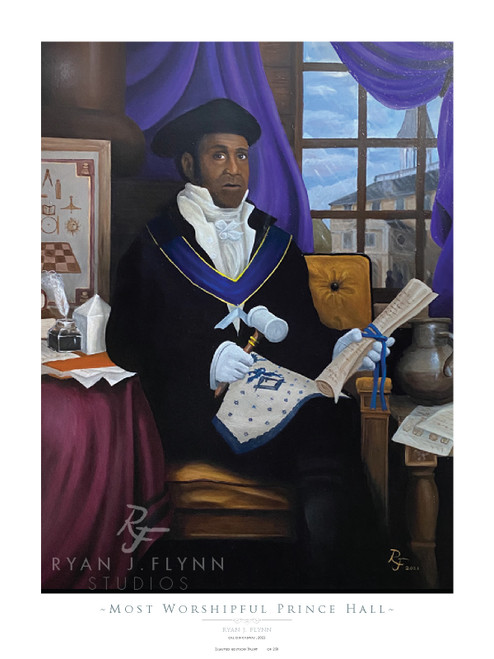 This painting by Masonic Artist Ryan J. Flynn depicting Worshipful Brother Prince Hall (c. 1735/8—1807). Brother Hall was an abolitionist and leader in the free black community in Boston. Unable to create a charter for an all-black lodge in Boston, he and several other men of color applied to the Grand Lodge of England. The grand master of the Mother Grand Lodge of England, H. R. H. The Duke of Cumberland, issued a charter for the African Lodge No. 1 later renamed African Lodge No. 459 September 29, 1784. The lodge was the country's first African Masonic lodge which later grew to become the foundation of Prince Hall Masonry, which exists to this day.

No official portrait of Prince Hall exists that was done in his lifetime, so with the help of RW Brother E. Oscar Alleyne (GLNY), and RW L. Ken Collins II (MWPHGLAL), Bro. Flynn conducted research to make sure everything in the painting had historical backing. Together, they discovered what is apron, gavel, and charter looked like, as well as items that were used in Lodge events during his tenure as Master. Outside the window of the sitting room sits his church which is depicted as it stood in his lifetime.

"It was truly an honor to work on this painting. The historical significance of this Brother, and the honor that his name still carries reminded me to push harder in creating something that I would be proud of." -Bro. Flynn

The Four Virtues Past Master Patent